Missing Pembrokeshire? Missing outdoors adventures along the Welsh coast? Well, you’ll be pleased to know that there are ways to get your Pembrokeshire fix without even leaving your home. Via your television screen, your desktop monitor, electronic tablet or laptop screen, you will soon be able to stream a brand-new ITV programme highlighting the paradise we call the Wales Coast Path.

Filmed in the summer of 2019, Wonders of the Coast Path follows journalist and broadcaster Sean Fletcher as he ventured off on an unforgettable adventure around the Wales Coast Path. The BBC Countryfile presenter, who you might also recognise from Good Morning Britain, explored the remarkable 870-mile Welsh coastline to see what makes the Wales Coast Path so special.

The six-part series airs weekly on ITV Wales starting in late April 2020 and will be broadcast nationally throughout the UK the following July. During the series, we’ll see Sean tour the Welsh coastline discovering fascinating pieces of history, rich wildlife locations and meet with some extraordinary people and communities.

Officially opened on 5th May 2012, the Wales Coast Path is a footpath which hugs the Welsh coastline for its entirety and totals 870 miles in length. Rather impressively, Wales is the very first country in the world to have a full coast path following the entire coastline of the country – no other country currently has such a path.

It stretches from the outskirts of Chester in the north all the way to Chepstow in the south-east. Along the way, it covers the Llyn peninsula and Anglesey, travels through the Snowdonia National Park, around Cardigan Bay and through Aberystwyth.

Passing through Cardigan it joins the Pembrokeshire Coast Path before reaching Carmarthenshire, where it then continues through Mumbles, Swansea and Cardiff. Passionate walkers may then wish to join the Offa’s Dyke Path to follow the borderline between Wales and England for further 177 miles, allowing them to walk the full border of Wales. Posts like these lead the way along the Wales Coast Path

What will we see in Wonders of the Coast Path?

Filmed between July and September 2019, we’re expecting shots of blissful blue skies, vivid wildlife sightings and stunning shoreline visuals no doubt. In his voiceover of the first TV ad we’ve seen for Wonders of the Coast Path, Fletcher claims to immerse himself in anything the Welsh coast throws at him so we’re suspecting watersports, incredible walks and more.

A quick spy of the broadcaster’s Instagram page provides exciting behind-the-scenes looks at his adventures throughout the country. Fletcher takes a visit to the beautiful Worms Head in Mumbles, sightsees the sunken forest at Borth and explores the Talacre dunes. His activities include rowing, surfing, and sailing as well as dolphin spotting in Cardigan and stargazing at Uchmynydd.

Sean Fletcher takes a seat in Babs, a restored car which once raced for the land-speed record at Pendine Sands; goes tank-driving at Castlemartin Firing Range and got involved with an archaeological dig at St Patrick’s Chapel.

When can we watch Wonders of the Coast Path?

The 2020 series will first be broadcast weekly on ITV Wales at 8.30 pm on Mondays. The six-part series begins on 27th April in Wales and focusses on a different Welsh region each week. Below is the full schedule for the ITV Wales broadcast:

It is then scheduled for broadcast nationally throughout the UK beginning in July. 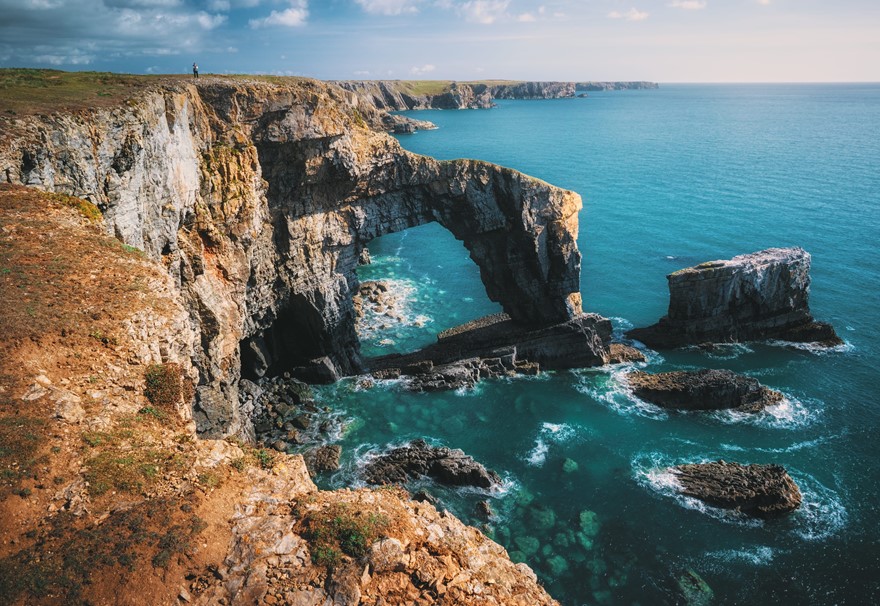 Explore an extraordinary world of marine life and the history of days gone by with a diving holiday to Pembrokeshire.

Find out why Pembrokeshire makes the perfect choice for a family holiday in Wales with beautiful sandy beaches, great activities and more.